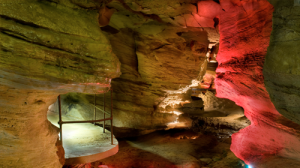 Our traditional guided tour lasts about one hour and covers all those passages that can be reached without climbing down or up over rocks.  All passages on the traditional guided tour are lighted.  There are no age restrictions on this tour and no special equipment is needed.  However, Laurel Caverns follows the natural slope of the mountain. The total underground walking distance on the traditional tour is about 3,000 feet, covering about 20% of the cave’s three miles of passages.

Do not think of Laurel Caverns as a typical tourist cave.  As a calcareous sandstone cave, the typical stalactites are geologically replaced by highly sculptured sandstone walls pre-designed by wind currents millions of years ago.  Laurel Caverns is one of the deepest caves in the United States; so the traditional tour, has the feel of a real cave adventure.

On the traditional tour there are stairs and sloped floors to walk down as well as walk up; so, the tour can be very strenuous for some.  The elevation from the visitors’ center to the lowest point on the traditional tour is 150 feet (and this is only a third of the way to the cave’s lowest point).   The presence of steps and the natural sandy floor of the cave make the use of strollers and wheel chairs impossible.  Shoes appropriate to such a terrain are strongly recommended.  Never wear high heels to a cave.  The cave temperature is 52 degrees F. year around, so a sweater or jacket should be worn.

All of the steep slopes and steps on the traditional tour occur in only two long passages, each the length of a football field. One is called the Hall of the Mountain King and the other called the Grand Canyon.  The MODIFIED traditional tour by-passes these two steep passages to create a fairly level (no steps – no steep cave slopes) 30 minute tour for those who are challenged by the great changes in depth of these two passages.  As a yardstick, this can be said: if walking up five flights of steps is challenging, the modified tour is recommended.  Apart from tour length, the departure-time rules for the modified-traditional tour are the same as for the traditional.   The scenes on this page are from the modified tour.

Reservations for the traditional and modified-traditional tours are not needed; but, it is helpful if large groups let us know in advance they are coming.  (See Educational Field Trips – bus and youth groups enter upon arrival.)

Cameras are welcome in the caverns, but please, no video recorders. 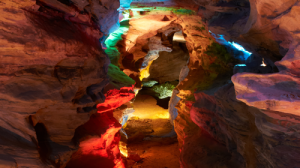 The Schedule for the Traditional Guided Tour

The Traditional Tour and Modified Traditional Tour are offered every day, without exception, even holidays, during the season open.  See the home page for these dates. When the first ticket for the “next tour” is sold a twenty minute countdown is started.  With this rule, no one need wait more than twenty minutes for the one hour tour.  The visitors’ center opens every day at 9:00 AM.  The last tour of the day enters at 4:30 PM.